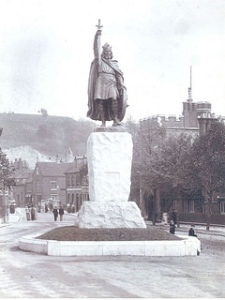 We like to pick our rulers. We pick the experts we listen to, and with so many “expert opinions” floating around we have no trouble finding someone willing to say what we are willing to hear. Or we might look to societal norms for direction. It is good to fit in and be like everybody else. Or we might let media shape our beliefs and the way we live. If it is normal practice for the likeable characters on the tv to do this or that then it must be okay for me to do this or that also.

We are not the first ones to set rulers over ourselves:

Then all the elders of Israel gathered together and came to Samuel at Ramah, and said to him, “You are old and your sons do not follow in your ways; appoint for us, then, a king to govern us, like other nations.” But the thing displeased Samuel when they said, “Give us a king to govern us.” Samuel prayed to the Lord, and the Lord said to Samuel, “Listen to the voice of the people in all that they say to you; for they have not rejected you, but they have rejected me from being king over them. 1 Samuel 8:4-7 NRSV

In the days of Samuel, when judges were ruling over God’s people, they asked for a king. In asking for a king to rule over them the people are actually rejecting God’s rule and getting themselves into a great mess. Samuel tries to warn them:

The things that rule over us take and take and take. And our lives become focused on those things we have chosen. Samuel notes that the people will get fed up and remember the One who gives, gives, gives:

And in that day you will cry out because of your king, whom you have chosen for yourselves; but the Lord will not answer you in that day.” 1 Samuel 8:18 NRSV

There is no help in that day as the people will bear the consequences of their decisions. We normally do. Yet there is good news there, found in those last words “in that day.” For there was another day ahead, hundreds of years later when in the midst of many peoples claiming “Caesar is Lord,” a small group were shouting something different: “Jesus is Lord.” They knew something the rest did not yet know; God had never actually abdicated His throne. Instead He was working out His sovereign purposes. He came to us, incarnate in Jesus of Nazareth, died for the atonement of our sins, and was raised from the dead to be hailed “King of kings and Lord of lords.” The true King is putting all things right again. Despite the mess the people of of God had got themselves into through their own choices, God was still the King! They could turn to Him again.

We can make a mess of life when we choose people and things which will rule over us. No matter the kind of messes we have created for ourselves we have a wonderful invitation. Not to make Jesus Lord, for He already is that, but in humility to choose Him. And we find that He has already chosen us. He is always King. He is still willing to lead. Are we willing to follow?

Welcome to My Blog

Have you ever read the Bible but it just didn’t connect? Sometimes we need to dig a little deeper. I hope to help you think through the Scriptures so that you can walk with Jesus in faith, hope, and love.

Join 2,179 other subscribers
Follow Thinking Through Scripture on WordPress.com